From the lows of Abuse to the highs of Victory

Regular, morning or maybe not so regular, I decided to watch The Faith Channel, a Christian Channel on Dstv and after Creflor Dollar came Joyce Meyer and she talked about how she had been abused as a child, abused by her dad. This information alone is heart wrenching. Imagine yourself being afraid of the one man in the whole world that should represent security to you.

She talked about a time when her dad abused her in his car. A police man stopped by and was going to arrest them and she thought, finally someone would save me. Only for her dad to return to the car to tell her that he lied to the police man that she was his cousin and the police man said the only way he would let them go is if he could have sex with her too and her father agreed! Take a minute to take that in. As If it isn't bad enough that a father is having sex with his daughter, he is okay with another man sleeping with her to get freedom for his own sin. She even talked of a time when he took her to a grave side to abuse her, have sex with her. Till this day she doesn't like it when a clenched fist seems to be drawing close to her face.


................But the grace of God! It's able to take us from the lows of lows and set us high up above with kings. With all of the abuse she went through she could have become ruined, drenched in her past, but God helped her to rise above all of it and put her on a pedestal where she could positively influence many people, possibly for generations to come.

Your past is what it is. Your PAST! It doesn't have to define your future. The word and grace of God is available to helps us! Joyce Meyer went on to forgive her dad and the test of that forgiveness came when God asked her to move her parents closer to where she lived. She wrestled with that instruction for a while, wondering why she should do that for people who basically inflicted pain on her. Eventually though she yielded, she obeyed God and brought them closer. Before her dad died he apologised to her, even telling Joyce Meyer's husband that he was a good and gracious man, because he had never tried to hurt him for all the bad things he did to Joyce. He knew many men wouldn't have been able to stand him. He did give his life to Christ before he died and was a good old man in his last years.

Romans 10:13 For whosoever shall call upon the name of the Lord shall be saved.

....And Joyce talked about how she had asked herself before why all this was allowed to happen to her and at a point God stopped her in her tracks and told her to stop asking. Often our experiences bad and good can be leverages to our success if we would only look at them that way. Sometimes we go through a thing so that we can better understand people and help them grow out of their own struggles. And so out of the depth of her abuse she rose up to become a solution giver and helper to many people today by the grace of God.

God chooses whoever He will.

Don't ever discredit yourself or anyone for that matter.
Just avail yourself.

The Pain of Unshared love

My sort of healthy pancake

How was your weekend? Hopefully you feel pumped and refreshed, ready to take on the new week!

Nim's games centre is a game and entertainment centre.People come to relax, play games and have fun. We invite you to come check out Nims place with your friends and have a good time. Use the code names Cutie diamond or Classy Africans to get 50% discount on your first game from 25th October to 31st October 2015. 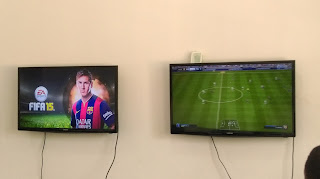 Chronicles of a jobless graduate 231015

Today is day something of me not working and its frustrating. Well I have a part time job but its away from where I live, it's in another state so I basically do correspondence kind of job. Meaning I am not fully able to exert myself as I wish I would have. You see I have an undergrad degree in pharmacy and a master's degree in public health and its been roughly 2 years since I got my MPH degree so I hoped by now I would have been working in a job of choice, but that hasn't happened yet.

I love to sew and I finally learnt how to sew, it is more work than imagined but the outcome is always rewarding. I started making a jumpsuit yesterday and I hoped I would be able to go far with it today, possibly complete it, but NEPA won't let me. Infrastructure in this country needs to become top notch or at least better than it is now so that individuals can run businesses even from home successfully.

So today I didn't get to do what I hoped to do and another jobless day has passed. Sometimes I wish I had taken on a job that I didn't necessarily like but that would have at least had me busy. Perhaps if I did that I would have leveraged on it into another job.
Today though unlike many other days I don't feel as bad because somehow I feel that I am close to a break through of some sort in my professional and business life and I feel like a felt God in a new dimension today. Some of you who have had to look for jobs for a little longer than you hoped may understand what I am talking about or not.

What I do know is staying in the hurt and asking questions and wishing things were better doesn't change things and so I resolve to stay positive , because in the end, as a man thinketh in his heart so is he. Plus dwelling on what could have been changes nothing. what's important is that we learn from all our experiences and use it to make our tomorrow and someone else's tomorrow better.........

Update: The day did end well, I made a 'Fantabulous' Jumpsuit, light at the end of the tunnel, Yes ? Yes! Because I have learnt to celebrate even the little things.

What depth have you crawled out of today?
What thoughts made you feel better about yourself?